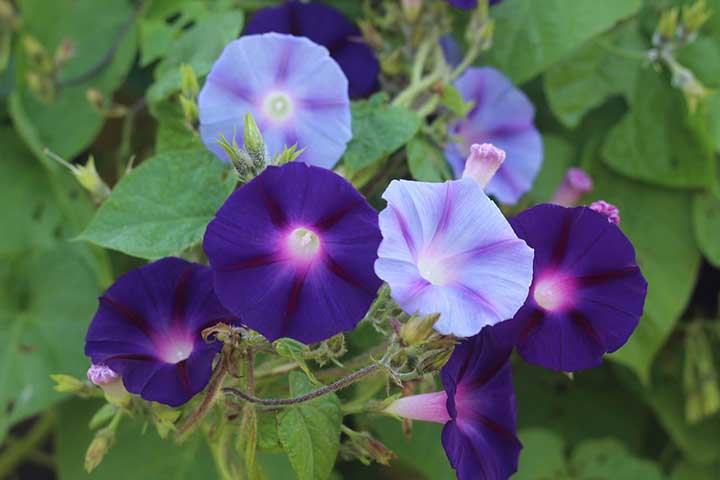 Morning glories have beautiful trumpet-shaped flowers and heart-like leaves, giving them a gorgeous appearance that is just as noticeable to other species as it is to humans.

Read on below and learn all about hummingbirds and why they like morning glories!

There are several good reasons for hummingbirds liking morning glories as much as they do.

For starters, the morning glory flowers have bright/vivid colors that are easy to notice when they are in full bloom

Morning glories are also often highly accessible for hummingbirds and located in an easy-to-navigate area for them.

The shape of the trumpet-like flowers makes a perfect chalice for hummingbirds to drink nectar and steal pollen from, in addition.

Further, the shape of the flowers also allows the aroma to waft out into the air easier than some flowers.

Other beneficial pollinators like bees (especially the big fat bumble bees) and butterflies are also highly attracted to morning glories in full bloom.

A few days after the trumpet-like flowers open up for business you’ll begin noticing a stark increase of interest in your morning glories from the bees and butterflies.

Is Morning Glories Safe for Hummingbirds?

If you’re worried about whether or not morning glories are safe for hummingbirds to eat/drink pollen and nectar from, you’ll be pleased to know that the flower is completely safe for the species.

If you’ve heard something about morning glories being dangerous, it is likely the seeds you are thinking about.

Morning glory seeds are dangerous for humans to consume, as they may cause hallucinations, dizziness, nausea, and diarrhea.

For hummingbirds, morning glories are easy to get to and are typically organic/healthy to eat and drink (nectar and pollen) from.

Where Should You Plant Morning Glories to Attract More Hummingbirds?

There are several tips and tricks to be aware of for attracting more hummingbirds while planning where to locate and plant your morning glories.

The first tip is to choose a spot that has excellent wind and rain coverage.

The less severe weather that your morning glories are exposed to, the longer they will last for your hummingbirds to feed on.

The next big trick is choosing a location that receives a ton of sunlight.

The more light that morning glories receive, the better off they tend to do. That means they’ll attract more hummingbirds and other beneficial species.

Another great piece of advice is to plant your flowers somewhere with great drainage. If their root zone gets too moist, the flowers won’t stay fresh and edible for as long.

One last tip is to plant companion plants with your morning glories that hummingbirds will be equally attracted to, like Mandevilla or Hollyhocks.

Hummingbirds are known for frequently lovely smelling and colorful flower blooms, like those of morning glories, during dawn and dusk more than any other time of day.

Morning glories are more likely to be visited by hummingbirds in the early morning hours before the sun begins heating things up for the day.

The second most frequented time of morning glories by hummingbirds is after the mid-day sun has reached its height for the day.

As soon as the sun begins to decline, and the heat wavers, hummingbirds start showing up at your morning glories again.

If your morning glories are in pots, it means you should set them out, or move them into the open, as early in the day as possible.

Leave your potted flowers out until the sun is setting if you want to attract the most hummingbirds possible.

There are well over 1,000 various types of morning glories, some of which hummingbirds are attracted to more than others.

Below, we take an in-depth glance at several of the best morning glory types for hummingbirds:

The “classic” sort of morning glory, known botanically as “ipomoea purpurea”, is one of the best all-around species for hummingbirds.

These plants grow up to 10 feet tall and put off countless blooms for hummingbirds to enjoy.

They come in blues, purples, pinks, whites, reds, and magentas.

The “Morning Star” morning glory type is typically white with bluish veins between the main petals, and yellow centers.

These popular morning glory flowers, botanically known as Ipomoea Indica, are often referred to as “Blue” because they are more often indeed blue in color than other species.

After the blooms have been opened for a while, especially in full sun locations, the flower petals fade to shades of violet and/or pink.

The “Ivy” type of morning glories is slightly similar to the Blue type.

The biggest difference is that Ivy morning glory flowers typically have a yellow and white pattern in their centers.

Ivy morning glory is one of the very best species for attracting not only hummingbirds but bumble bees also.

The “Cardinal Climber” is one of the most unique morning glory types there are, including for attracting hummingbirds and other beneficial pollinators.

The color of the flowers is a deep and crisp red, like the Indiana state bird, the Cardinal.

The Cardinal Climber is also known as the “hummingbird vine” because it is one of the most attractive flowers for the species.

Tolerant to wind, and salt, the “Beach” Morning Glory gets its name from the fact it is often spotted near the beach.

For those who live near the beach, or will be growing flowers somewhere with excessive wind, the Beach Morning Glory is extremely ideal.

The Ipomoea alba, or “Moonflower” Morning Glory, is another powerful attractant to hummingbirds, bees, and butterflies.

Moonflower morning glories are one of the only completely solid colored morning glory species there are; it is solid white like the moon.

As the name suggests, the “Heavenly Blue” Morning Glory is an amazing azure blue color that stands out from the other species in the genus.

The species grow to 10 feet or more and does incredibly well on fences, terraces, and in gardens.

Heavenly Blue is a highly attractive flower to pollinators such as hummingbirds.

The morning glory species known as “Scarlett O-Hare” come in a bright red/scarlet hue, and produce some of the largest blooms in the entire genus.

The Convolvulus Arvensis is a species of morning glory that is very light in color, typically white, off-white, or pinkish, with barely visible white or yellowish stripes.

Compared to other species, the blooms look slightly faded and wrinkled. However, they smell amazing and are bright enough to attract plenty of pollinators like hummingbirds and butterflies.