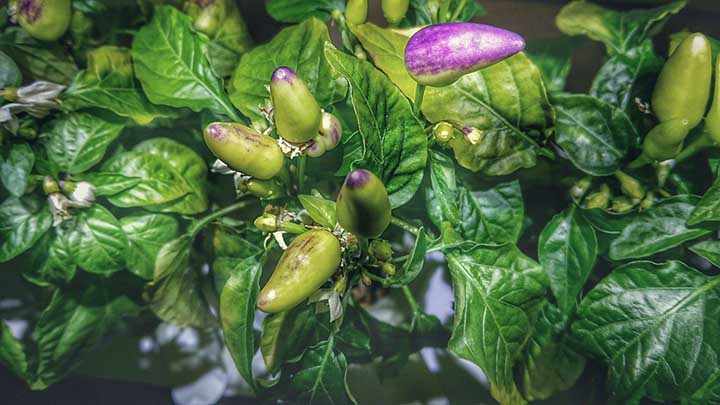 Why are my peppers turning purple?

Your pepper plants may be turning purple because it is part of their natural ripening process, they are extra rich in iron, low in nutrients like phosphorus, or have been affected by extreme weather patterns (high and low-temperature fluctuations), including frost.

Read on below and learn all possible answers to why your peppers are turning purple!

Why Are My Peppers Purple?

The purple coloring affecting some of your peppers, or parts of your peppers for that matter, may be caused by several common issues that you should know about.

The number one reason peppers turn purple is that they are lacking nutrients. The most typical nutrient they lack is phosphorus when they aren’t fertilized properly.

Having too much iron is another common issue with pepper plants that causes parts of the peppers to turn purple.

Too much sun, and extremely cold nights or mornings, are another critical combination that often results in whole peppers turning purple practically “overnight”.

Growing peppers out of season, and dealing with unexpected frosts, and heavy morning dew, are also primary reasons that peppers turn purple.

Some peppers also take on purple streaks, strike, or marbling when they are exposed to excessive amounts of sun and heat. In this case, they are still very much edible.

All things considered, there are also numerous pepper species that produce peppers that naturally have a purple color during one development stage or another. These peppers are perfectly edible.

Jalapenos are one of the most famous peppers that end up solid green but display purple color while the peppers are maturing and ripening.

Can I Eat Purple Peppers?

Peppers that are affected by weather conditions, lack nutrients, excessive amounts of iron, and other issues are usually considered edible, but not very ideal or tasty.

Purple bell peppers (and other hot and sweet peppers), on the other hand, as well as other purple pepper species, are perfectly safe for eating.

A few of the most common peppers that are genetically purple include:

There are currently an unknown amount of hybrid purple pepper species, with new ones popping up each season!

Not all peppers turn purple naturally. Knowing the difference between a naturally purple pepper and a sick pepper that’s purple is crucial.

Below, we discuss several of the most common types of peppers that turn purple (and why each one turns purple!):

Purple tends to show up on hot peppers, sweet betters, and bell peppers from time to time in the form of streaks or marbling.

Fear not! These purplish peppers are still very much palatable. They typically take on purple when they’ve been exposed to high heat for long periods of time.

The cayenne pepper is one of the most common peppers that turn from green to purple as a part of its natural ripening process.

One of the most commonly culinary peppers on earth, the green bell pepper is also often streaked with purple coloring.

The most predominant reason for green bell peppers taking on purple color is the extreme heat and sun of the summer gardening season.

The world-famous smoking hot and sometimes sweet jalapeno pepper is another one that turns purple during its ripening stages.

Unlike cayenne peppers, however, jalapenos turn fully green after they turn purple, rather than maturing into a solid red color.

The ghost pepper is a great example of a seriously hot pepper species that only sometimes turn purple.

These peppers don’t always turn purple, they only change to that specific color when they are exposed to more sunlight than they actually need.

That said, ghost peppers may turn purple off the plant or while still growing.

The chili pepper is another worldwide culinary staple. Likewise, it is known for turning purple from time to time.

Like ghost peppers, chilis turn purple when they are still growing, or already picked, if they get a lot of direct sunlight.

They will eventually turn to their fully ripened and natural color if you continue to allow them lots of light.

The most common reason for yellow peppers to turn purple is that the weather is fluctuating too much between two extremes, or it is either too hot or too cold in general.

It’s ok to eat them, in these cases, and you won’t even taste a difference most times.

What to Do When Peppers Turn Purple?

There are only a couple of options when your peppers turn purple: harvest them, or take action to prevent more of them from turning purple.

The first step is to determine whether or not they should be turning purple. If they are not one of the species that naturally turn purple while they are ripening, there is a high likelihood that your peppers are suffering from a lack of nutrients or extreme weather exposure.

If you choose to harvest them immediately, depending on the species, they will require a few days to a week or so in the window, or on the kitchen counter, to finish ripening.

All of the purple colorings should disappear by the time it is ready for eating.

If your peppers weren’t supposed to turn out purple, they may just be going through a natural ripening process.

In this case, they will turn from say, green or red, to purple, and then back to red, green, or whatever color they should be when they are fully ripe.

Only a few peppers should remain purple after being picked and fully ripening, such as purple bell peppers.

How to Prevent Peppers Turning Purple?

The best way to prevent peppers from turning purple is to grow them somewhere with a stable environment and tolerable climate.

You may also consider growing them hydroponically (where you control practically everything about their environment and nutrient intake).

However, if you’re like most gardeners, you enjoy growing peppers outside in the soil.

A few of the best ways to prevent peppers from turning purple outside include:

Remember, some peppers turn purple no matter what you do. They will, however, turn to the proper color when they are fully ripe and ready for use.

Your peppers are most likely turning purple because of extreme heat or sun exposure. If not, it’s most likely a nutrient deficiency causing the peppers to turn purple.

That said, keep in mind that numerous pepper species turn purple for a short period during their ripening processes, such as cayennes and jalapenos.

If you’re not sure, just set your purple pepper in the window or on the kitchen counter for a few days and see if it continues changing colors. If it does, it is still ripening. Adding a banana beside it may increase the speed at which it changes to the proper color.

Also, remember that the best way to prevent purple peppers is to protect them from harsh weather and provide them with proper nutrients, water, light, and air flow.