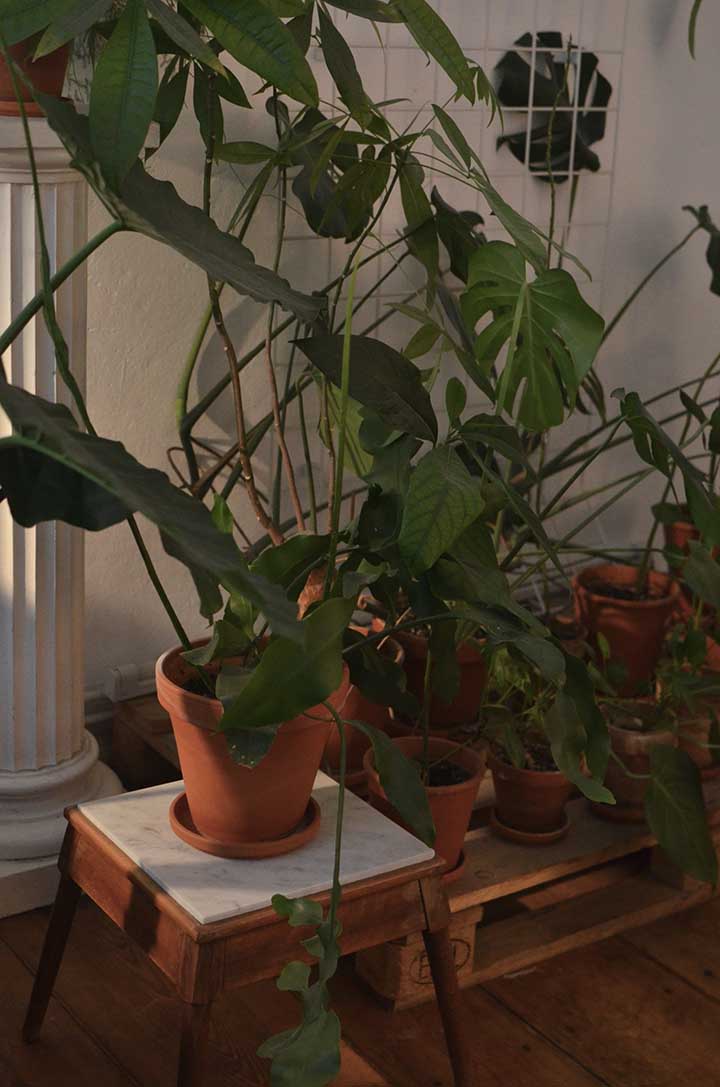 Philodendrons are one of the most popular houseplants, for many reasons including that it’s so easy to care for.

But, why is it that sometimes Philodendrons grow thin and spindly, rather than lush and healthy to look?

Why is my philodendron leggy?

Your philodendron is leggy because it lacks proper lighting. If your Philodendron is growing inside, either you have it in or near a window that doesn’t get enough direct light, or you don’t provide it with enough artifical light. Outside plants get leggy if they don’t receive 6 hours or more of sun per day.

Read on below and learn everything you need to know about why your Philodendron is leggy!

There are several reasons that your Philodendrons may have become leggy, most of which center around lighting issues.

Let’s explore the 4 most common ones in more depth below:

If your Philodendron is potted and placed in a window, it will become leggy eventually if the window doesn’t provide plenty of direct sunlight.

Likewise, if your indoor Philodendron is in a large container on the floor, and relies on a window for the majority of its light, it will grow leggy.

2. It’s Too Far Away From the Artificial Light

In the case that you provide your Philodendrons with some sort of artificial lighting, and it becomes leggy there are typically two reasons: your light is too weak, or the Philodendron is placed too far away from the light for it to be of any real use.

3. It’s Not Planted In a Proper Location

Philodendrons that are planted in shady areas, or planted near newer trees and shrubs that may have quickly outgrown them, likely lack adequate sunlight and become leggy sooner or later.

The best place for planting Philodendrons is typically considered indoors in a pot.

But, if you do put them outside, do it along borders, or corners of the yard that receive plenty of light yet also receive a bit of shade in the morning and evening.

4. Something Is Otherwise Blocking Its Light

There is also the chance that something else is blocking the light from reaching your Philodendron.

It could be a tree that has grown a few feet wider over the course of several years or some fast-growing species that you planted more recently that is hogging all the sun.

That said, it could also be that new garden shed, or gas grill that is blocking the light from your Philodendrons!

How to Fix Leggy Philodendron?

Fixing a leggy Philodendron, and preventing the rest of your plants from becoming thin and spindly, is relatively straightforward: fix the lighting situation to something more suitable for the species.

Let’s look at a few of the most basic ways to do so:

If your Philodendrons are in pots and are leggy, simply move them somewhere that’s brighter. Or, if you’re giving them artificial light, slowly increase the amount of light exposure over a period of time.

A window that receives 6 to 8 hours of direct sunlight is an excellent choice or in a large pot on the floor near an even bright window or set of glass doors (patio doors, french doors, sliding doors, and such).

Transplant Your Philodendrons in a Sunnier Spot

The first step to fixing outdoors Philodendrons that have become leggy is replanting them somewhere in your yard, garden, or flower beds that make more sense for them (light-wise).

Try to choose a place that gets plenty of sun for the majority of the day, but not from sun up till sun down (you don’t want them to bun, they only need 6 to 8 hours of light).

To do so, start by watering them thoroughly one day, as well as watering the place you’ll plant them.

The next day, begin by roughing up the spot you’ll replant the Philodendrons, and then go dig them up and bring them over to the fresh and prepared holes.

Make sure the hole is wider and slightly deeper than the root balls of the Philodendrons you’re transplanting before you stick them in the ground.

If you have it on hand, add a nice portion of organic matter (compost, fresh grass/leaves, or whatever you have) to the backfill as you fill in the hole.

Trim the Tree, Hedges, and Shrubs Around Your Philodendrons

Another clever way to solve your leggy Philodendron issues is simply by trimming up all of the overgrowths around them.

Sometimes the nearby flowers, bushes, shrubs, and tree branches block out too much light from the plants on the ground around them, like your Philodendrons.

In these cases, the only thing you can do (besides moving them) is to trim the trees, hedges, and shrubs around your leggy plants once or twice every year.

After you have relocated, transplanted, and/or trimmed the problematic trees and shrubs blocking the light from your Philodendrons, pay attention to them.

If you watch your plants closely, taking the time to have a look at them every day (or two, or three), you’ll notice if they seem happy, or they begin to struggle.

The trick is to respond on time to the signs they are giving you. For example, the first leggy shoots are an indicator to move them or trim the surrounding overgrowth.

If you do, you may prevent the whole batch of Philodendrons from becoming leggy. On the other hand, your entire patch of plants can become thin and spindly.

How to Prevent Philodendron from Getting Leggy?

The best way to prevent Philodendrons from getting leggy is to plant them or place their pots, somewhere that receives adequate light levels.

Philodendrons require around 6 hours of direct sun, or 8 to 12 hours of bright but indirect light each day, less light results in thin and spindly (leggy) growth.

So, make sure that you plant them properly, otherwise, they get leggy and/or die (or you have to dig them up and move them).

Additionally, feeding them a bit of plant food, and keeping them properly hydrated as well (water them once every 5 to 10 days), and well-drained, also goes a long way in keeping them in tip-top shape (which is the opposite of leggy).

Some Common Types of Philodendron Happen Leggy and Their Symptoms

There are dozens and dozens of types of Philodendrons, though some are more popular than others. A few of the most common types of Philodren that share symptoms when they are becoming leggy include:

These Philodendron species all display the same symptoms when they lack adequate lighting, they stop getting wider (to conserve energy), they grow taller (attempting to reach more light), and they become spread thinner and thinner (because they are using all energy to reach the light).