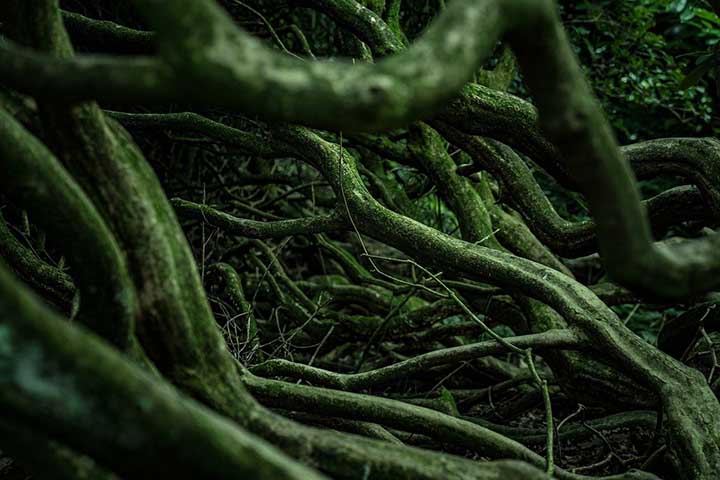 Philodendrons come in many different shapes and sizes and can make wonderful additions to any garden. But if you aren’t familiar with these plants, you may wonder, are their roots invasive?

In this article, I’ll take a look at philodendron roots in-depth and let you know whether they’re invasive or not. That way, you can avoid the many issues that come with invasive roots and keep your garden growing healthy.

Types of Roots in Philodendrons

Most plants only have roots under the ground, but philodendrons are special and have two main kinds of roots. These are:

Despite their fancy-sounding name, you already know what subterranean roots are.

This is what people are usually talking about when they mention roots. They’re the roots below the ground that give the plant nutrients from the soil.

If you’ve ever grown an orchid, you might have noticed spindly white things coming from the plant. Those are called aerial roots.

Yes, you read that right — philodendrons can grow on trees!

What to Do When Philodendron Roots Are Invasive?

When philodendron roots are invasive, you have two main options.

One of them is to remove the roots. To do this, you’ll need to gently dig around the plant to find them.

There are different recommendations for how close to the plant you can cut. For tree philodendron, you can measure the trunk’s diameter, multiply that by three, and don’t prune the roots any closer than that.

Pruning more roots can restrict your plant’s nutrients. Sometimes it can cause it to fall over!

The other option is to do nothing.

Yes, that’s right. Most varieties of philodendron have flexible roots.

They’re not like tree roots that get under your sidewalk and cause all kinds of damage.

So even though their root system can extend far and wide, that doesn’t necessarily mean their invasive nature is a problem.

If your philodendron is sucking up all the moisture from the soil or damaging your concrete and you’ve rooted out (no pun intended) other possibilities, that’s when you might want to consider taking action.

How to Prevent Philodendron Roots from Invading?

If you’re concerned about your philodendron roots invading, the best thing to do is set up a root barrier. Root barriers are pretty simple: you just add a cloth or plastic barrier around the plant. Once the plants hit the barrier, they will go deeper into the soil instead of spreading out.

Sometimes they can go past the barrier and come back up to the soil, but this is usually only if the soil doesn’t drain well.

When you’re choosing a material for the barrier, you’ll usually want something that’s impermeable. This means it won’t let moisture through it.

Then you’ll want to make sure it goes down at least 30 inches into the soil and goes above the top of the soil.

If you don’t like the look of the barrier, feel free to add some decorative stones, gravel, or whatever else suits your fancy.

Here are a few philodendron types you might want to think about growing if you’re worried about invasive roots:

Heartleaf philodendrons are vining plants with heart-shaped leaves.They’re popular as indoor plants, but you might not know that they can be grown outside, too.

They work well as outside plants since they can climb. Just stick a trellis around it, and soon enough, you’ll have a lovely display.

If there was a weird plant name contest, I think the fiddle-leaf or horsehead philodendron would win by a landslide. The names of this plant come from its uniquely-shaped leaves.

No matter what you think it looks like, it can sure make a unique addition to your home.

It’s also a climbing plant, so if you don’t want horseheads all over your yard, you can have it climb up a trellis instead. It’s sure to catch a few eyes up there!

Okay, the results are in, and it looks like the fiddle-leaf philodendron actually won second place in the weird names contest.

If you can get past that, the plant has thick, green, pointed leaves that look great in almost any garden.

Do Philodendrons Have Deep Roots?

How Do You Control a Philodendron’s Roots?

If you’re growing a philodendron inside and want to control its roots (like if you’re transplanting it, for example), you can gently dig out the plant and its roots from the pot.

The mass of roots underneath the plant is known as the root ball. If the roots are dense and tangled in the same shape as the pot you pulled it from, this is a potbound philodendron.

Potbound philodendrons’ roots won’t grow into larger pots like normal. Instead, they’ll keep growing in the same shape and get more tangled up.

They won’t have access to all of the soil’s nutrients, and they might not be as stable.

If you want to fix the issue, cut the roots along the outside of the root ball.

Then you can move the plant over to a larger pot, put some soil in it, place the plant in, pack some soil around it, and give it a healthy dose of fertilizer to encourage its growth.

For outdoor plants, you can put up a root barrier to control the roots, as I mentioned earlier. You can also dig around the plant and prune some of the roots — just be cautious.

Smaller roots are better to prune than large ones since cutting them is less likely to make the plant fall over. It’s also best to cut roots that are as far from the plant as possible.

Do Aerial Roots Grow Back?

Yes, aerial roots will grow back if you cut them. Think of it like cutting a single leaf off a plant — it will grow a new one in its place.

This is good news if you cut off the aerial roots by mistake. They can actually be useful for helping a philodendron climb a trellis, for example.

But if you don’t want them to come back, they will anyway. Not to worry — just cut them off again, and you’ll be good to go for a while.

Can Aerial Roots Grow in Soil?

Even more interesting is that when you put them in the soil, they will work like normal (subterranean) roots. They can help the plant get additional nutrients from the soil and give it some added stability.

So if you’re thinking about cutting off aerial roots, consider moving them into the soil instead. That way, you can help the plant and your aesthetics at the same time.

Sarah is a Georgia-based writer that has been writing online since 2019. When she was in the 5th grade, she started growing a small herb garden indoors and has been hooked on gardening ever since. She's also passionate about designing spaces that look stunning but still feel like home. When she's not writing, you can find her playing piano, learning Japanese, composing music, or enjoying a good video game.