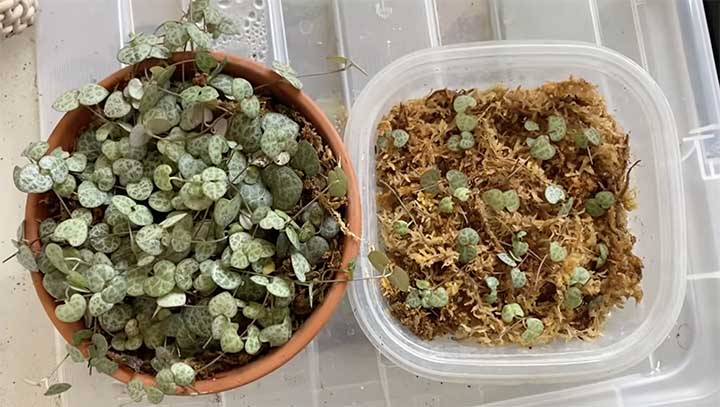 The string of hearts (Ceropegia woodii) is an evergreen vine from South Africa and Zimbabwe. This plant is often grown as a hanging plant or trained to grow up a trellis. In the wild, it grows up plants, using them as a living trellis. If you are thinking of growing a string of hearts vine, you may wonder, “What kind of soil does string of hearts need?”

When growing a new plant, it is always tricky figuring out what soil mix they will grow best in. This guide will help you make that decision.

What Kind of Soil Does the String of Hearts Need?

String of hearts needs a fast-draining soil. A commercial cactus and succulent potting mix will work well. You can mix your own soil from perlite, sand, and a regular potting mix. You can use one part coco coir and one part pumice instead of a commercial mix.

The string of hearts has to have well-draining soil. The roots and tubers will rot otherwise. You can use a commercial potting soil for cactus and succulents. This soil mix has the advantage of being easy to find and ready right out of the bag.

If you prefer to mix your own soil mix for your string of hearts, there are several recipes you can use. Here are a few of the most common.

If you can’t find cactus potting soil, you can use a regular indoor plant potting mix with this recipe.

This recipe does not use any potting mix.

Coco coir is the fibrous material on the coconut and is a by-product of the coconut industry. Use the ground coco coir for these recipes.

Type of Planters for String of Hearts

In addition to the right potting mix, you need to put your string of hearts plant in the correct type of pot. First, make sure any pot or planter you use has drainage holes.

Although the vines can get quite long, the actual crown and root system is small, two to four centimeters tall. Place your string of hearts in a small hanging basket about one inch in diameter larger than your plant.

If you are training your string of hearts to grow up a trellis, choose a shallow pot or planter that is about six inches deep.

You should repot the string of hearts every year.

A good time to prune the string of hearts is when you repot it. Cutting the vines back will result in vigorous vine growth during the spring and summer. Save the trimmings from the vines to start new plants.

Plant the seed in a fresh pot of potting mix. Just cover it with soil. Keep the soil moist but not soggy until the seedling has become established, then transition to a regular watering schedule.

Another name for the string of hearts plant is the rosary vine. Bead-like tubers form on the vines. To propagate the plant, place a tuber in a pot while it is still attached to the parent plant. Do not bury the tuber. When roots are established, cut the tuber away from the parent plant after about eight weeks.

All those vines you cut back can be used to grow new plants. Take a four to six-inch cutting and put it in the potting mix. Water the cutting in. Water once a week for about eight weeks until the plant is established, then transition to a regular watering schedule.

Before planting a string of hearts plant in new potting mix, soak the potting mix in water overnight. Coco Coir may have trouble absorbing water otherwise. After the initial wetting, let two-thirds of the pot’s soil dry out between waterings in the spring and summer.

In the fall and winter, let the ground in the pot get almost completely dry before watering. Overwatering will cause root rot. When watering, water until water runs out of the drainage holes. Let sit for fifteen minutes, then empty any water in the pot’s saucer.

Where Can I Find Coco Coir?

Coco coir has become a popular additive for gardeners, so you should be able to find it anywhere you buy gardening supplies.

Where Can I Find Pumice?

Most nurseries have pumice. It is available online if you do not find it at your nursery.

Where Can I Find Perlite?

Perlite is a common additive to potting soil, so you should be able to find it in any place with gardening supplies. In addition, it is light, so it can be cheap to buy in bulk online.

Where Can I Get a String of Hearts Plant?

These plants are available from big box stores, online, and nurseries.

In conclusion, the main requirement for a potting mix for the string of hearts vine is that it drains well. Cactus potting mix is frequently used for this plant. You can use a regular potting mix if you add some things to make it drain better. Finally, you can mix up a potting mix from pumice and coco coir if you do not want to buy a commercial mix.

Stephanie Suesan Smith has a Ph.D. in psychology that she mainly uses to train her dog. She has been a freelance writer since 1991. She has been writing for the web since 2010. Dr. Smith has been a master gardener since 2001 and writes extensively on gardening. She has advanced training in vegetables and entomology but learned to garden from her father.