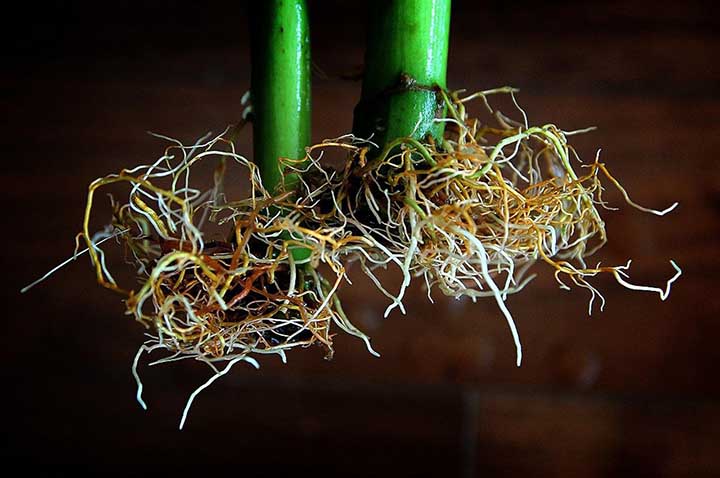 Hydroponic plants grow with their roots submerged in or exposed to a mixture of water, liquid nutrients, and oxygen.

But, what happens when hydroponic plant roots grow bigger than what’s necessary (or healthy)?

Can you trim roots in hydroponics?

Roots can and should be trimmed in hydroponics when and if they get too large for the system. That said, not all types of hydroponics require root trimming, such as dutch buckets and other deep water culture hydroponic growing systems (which promote steady root growth, length-wise, indefinitely).

Why and When Should We Trim Roots in Hydroponics?

Typically, the main reason for trimming a plant’s roots is to constrain/control its growth.

However, in hydroponics, where there is no dirt surrounding the roots, trimming roots plays a slightly different role.

Unlike other plants, you don’t wait to trim hydroponic roots until you’re ready to stunt a plant’s growth.

With hydroponic plants, roots need to be inspected regularly for brown, black, dead, and smelly roots (all signs of a dead, dying, or unhealthy root system).

Even white, off-white, and yellowish or light brown roots should be trimmed from time to time, especially in the ebb and flow hydroponics and other systems that water flowers through passageways (like PVC pipes), where they can cause clogs and major issues with the water and nutrient solution flow.

In addition, hydroponic plants that are destined for transplanting may benefit from having their roots periodically trimmed until they are moved to their new home. That way they don’t grow too large or suck up more nutrients than you want them to (until you’re ready).

What Happens if You Trim Plant Roots in Hydroponics?

Trimming plant roots in hydroponics allows the plant to redirect the majority of its energy to other areas (such as blooms, developing fruits and/or vegetables, and other parts that are struggling or require a great deal of energy).

That means healthier plants and possibly even larger yields.

Further, many times, when you trim your hydroponic plant roots, the extra space in the passageways allows for easier water flow and an evener distribution of nutrients and oxygen.

Again, this increases your plant’s odds of survival, in general, as well as its potential yield.

How to Trim Roots in Hydroponics Properly?

Pruning, or trimming, hydroponic plant roots is far easier than it probably seems to new gardeners.

All you need to do is follow these easy steps to trim roots in hydroponics properly:

The easiest way to start trimming your hydroponic roots is to snip the longest roots first. This allows you to get a better look at the bulk of the root system without the stragglers.

Next, look immediately for any plant roots that are black, brown, or yellow and slimy.

Also, check carefully for any additional roots that stink (because they are most likely rotting). Finding these smelly roots helps avoid developing a case of root rot.

In all of the above scenarios, the roots should be trimmed completely off (down to the white part, if there is any white part left).

While you are trimming up your plant’s hydroponic roots, make sure that your trimmings don’t exceed 30 to 35 percent of the entire root mass.

Trimming more than one-third of the plant’s roots is a sure way to throw it into shock or even kill it.

If you want to play your cards safe, stick with reducing the mass by 50 percent (or no more than what is strictly necessary).

4. Even Up the Ends of the Roots

Now you’re getting close to finishing up the job. All that’s left is a couple of steps and you’ll have properly trimmed hydroponic roots.

Snip any roots that are sticking out of the bottom of the mass, until the bottoms of the root mass are more or less all of an equal length.

5. Tidy Up the Sides of the Roots

The last step before cleaning up your mess is to tidy up the sides of the root mass.

Anything that still looks out of place should be snipped away from the rest of the roots at this point.

When you are finished, the roots should be as uniform as possible.

6. Clean Up Your Mess

Finally, sweep up all of the roots you snipped and throw them in the compost pile or trash can (or cut them over a container in the first place).

Avoid pruning the plants directly above the hydroponic system as you don’t want the clippings falling into the pipes or reservoir.

Black, brown, and smelly roots clippings falling into the water reservoir can clog up your system’s filters and pumps, as well as spread disease or bacterial infection to other plants.

How to Take Care of Plants After Trim Roots?

If their roots are trimmed properly, hydroponic plants don’t require much aftercare.

However, we’ve included a few pointers for beginners:

It’s important to note, again, that plants whose roots have been properly trimmed don’t require special aftercare (the plants are often stronger and have faster growth after trimming).

How Do You Control Roots in Hydroponics?

The best way to control roots in hydroponics is to constantly monitor them and trim them when they get too big.

Likewise, roots need trimming if they turn brown, black, or are beginning to smell like they are rotting.